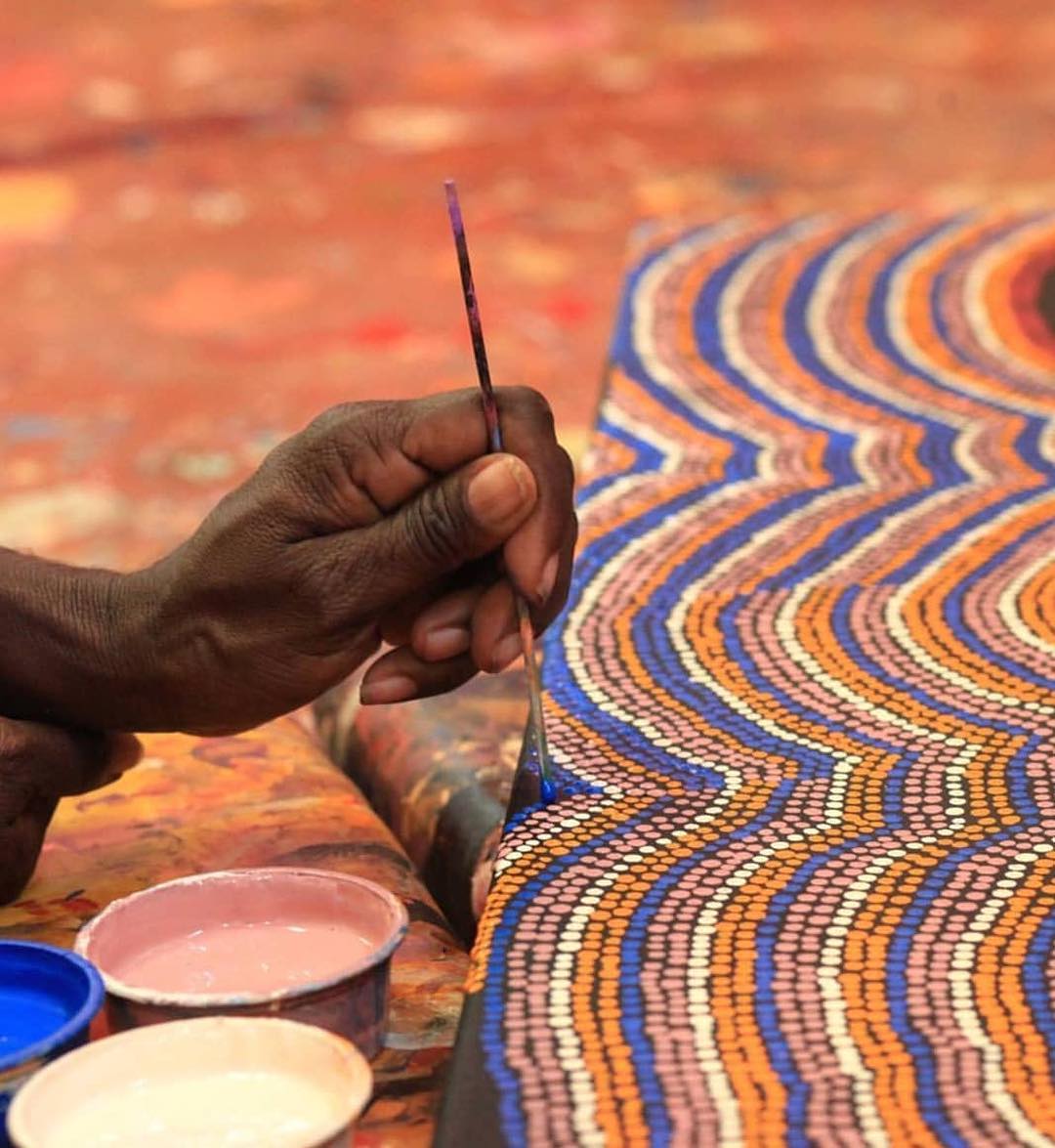 The concept of conveying messages through art is universal. For First Nations people, using art to communicate is fundamental to cultural preservation and strengthening - it allows customs and beliefs to continue and evolve over time. First Nations people didn't have a written language. Instead, we use symbols, or iconography, as a means of storytelling.

First Nations art spans tens of thousands of years. This was confirmed in 2013 when archaeological excavations from Jawoyn Country in Arnhem Land revealed a charcoal design dated at 28,000 years old. It represents the oldest confirmed pictograph in Australia, but the existence of rock art may reach much further into the past. The use of symbols allowed (and still allows) First Nations people to save and share cultural stories that taught, and continue to teach, lessons of survival, sustainability and ethics.

According to Dharug woman and Director of the Koorie Institute, Liz Cameron, First Nations symbols are ‘visual forms of knowledge that express cultural intellect within a sense of place and spiritual space’. Comparing Aboriginal and Torres Strait Islander symbolism to the Western interpretation of “art”  does not acknowledge the cultural and generational significance of these systems of visual knowledge. Cameron also highlights how First Nations creativity is less about the pursuit of aesthetic value and more about the portrayal of meaning concerning Creational periods, often labelled as the Dreaming.

Because there are hundreds of Nations in Australia, Aboriginal and Torres Strait Islander symbolism is very dynamic. Each language group may have their own unique style of markings as part of their customary laws. The symbols, strokes and arrangements that are unique to that group remain the intellectual property of that Nation.

Symbols can also vary depending on the context of the story or the style of the artist. First Nations symbolism may convey several layers of story depending on whom the story is being told to: children, Elders or newcomers. Artists have their own imaginative and technical approach that may influence the portrayal of symbols. For example, the colours they use and their spatial composition.

The meaning of First Nations symbols

Many of the symbols used by First Nations artists are a variation of lines or dots. Alone they are simple, while an elaborate combination of various symbols can tell complex Dreaming stories. Unlike ancient Egyptian hieroglyphics, the order or placement of symbols is not based on a conventional or pre-established meaning. So a more explanatory guide, like the artist’s exhibition brochure, may help you understand the First Nations symbols featured in their art.

Obtaining information directly from the artist is one of the best ways to begin your understanding. While a broader understanding of these symbols is a great starting point, it’s always best to learn about the story and context behind the art and its narrative. Interpretations are best made when you know the details. If you want to understand symbolism and art, try considering these questions: Where does the story take place? From which Nation does the artist originate? How does the story relate to Country?

While symbols differ extensively between language groups, family clans and artists, there are a number of useful starting points that may help identify potential meaning.

Animals are usually represented by the tracks they leave in the dirt or sand. Kangaroos leave a set of mirror-image tick shapes from its hind paws and long tail. An emu leaves an arrow-shaped footprint. And goannas, possums and other small marsupials leave E-shaped tracks due to their claws.

The U-shape that is left on the earth after someone sits cross-legged has come to represent a person. The tools or weapons painted beside the U-shape help define the person’s gender. A symbol for a woman may carry an oval-shaped coolamon bowl and digging stick, while a symbol for a man may have a spear or boomerang.

Places of meeting or connection are usually marked as a circle or set of concentric circles. These markings can symbolise a bonfire, campsite or waterhole. Parallel lines connecting circles usually illustrate a journey of some kind, whereby travellers stop at a series of locations.