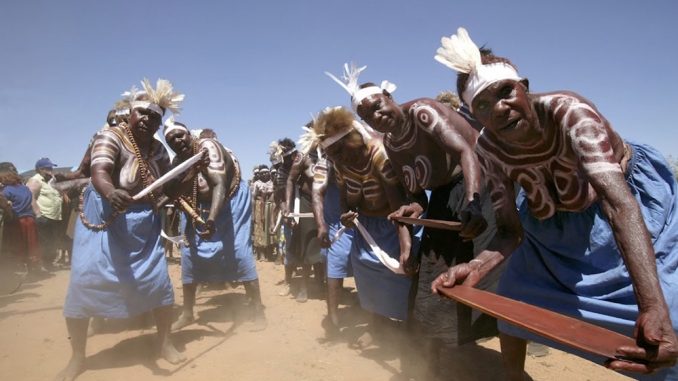 The massacre occurred after a white dingo trapper, Fred Brooks, was found murdered on Coniston Station in 1928. Brooks’ body was found with traditional weapons in a shallow grave.

After his death, a reprisal party was formed and led on horseback by Mounted Constable George Murray. The party was made up of both civilians and police.

Over a period of several months over 60 Aboriginal women, men, and children were killed at different sites. These events became known as the Coniston Massacre.

Two Warlpiri men, Arkikra and Padygar, were arrested for the murder of Brookes. They were held in Darwin before being acquitted (found not guilty). There are many accounts by Aboriginal eye-witnesses that point to Kamalyarrpa Japanangka, also known as ‘Bullfrog’, as the true killer of Brooks.

In 1928, scarcity of resources like food and water had led  to tensions between settlers and Aboriginal people across the Central Australian region. Accounts from 1928 highlight that Brooks was killed due to breaching Warlpiri marriage law. Brooks had been living at a waterhole called Yurrkuru, on Coniston station near a group of Warlpiri people, including Bullfrog.

“Aboriginal people were angry as they watched their waterholes being destroyed by cattle, fences being erected and white men taking their women as wives or servants. Their law, customs and traditions were being violated.” - Coniston Documentary, PAW Media.

While Brooks did not have an Aboriginal wife, many first-person accounts highlight that he placed demands on Bullfrog’s wives, and secondary accounts suggest he may have sexually assaulted one of his wives.

Marriage law was governed by Aboriginal law during this time, and breaking that law was a punishable offence. The violence that erupted at Coniston highlights the cultural misunderstandings that often created conflict throughout early colonisation. According to Warlpiri law, Bullfrog acted lawfully in exercising his traditional Aboriginal marriage law. But the consequences of the reprisal massacre were devastating for Aboriginal people across the region. Warlpiri, Anmatyerre, and Kaytetye people mourn the loss of family who were killed during the Coniston Massacre.

The events of Coniston highlight the breakdown in British law during this time period. Settlers acted outside their law when the killings took place, rather than allowing Bullfrog to be brought to trial (even in a western context).  No one was charged for the more than 60 murders, and a board of enquiry that was set up to investigate ruled that the reprisal party had “acted in self defence” [1].

The memories of Coniston are still fresh for Aboriginal people across the Central Australian region. On Friday the 24th of August, people from all over the Northern Territory meet at Yurrkuru, Brooks Soak, 60kms east of Yuendumu to recognise and mourn the loss of loved ones that were killed during 1928.

Consiton, a movie by David Batty and Francis Jupurrula Kelly was released in 2012, and shares Aboriginal views on what happened at Coniston. The docu-drama interviewees are either survivors from the massacre or from the generations descended from the massacre victims.

For more information on the massacres of Aboriginal and Torres Strait Islander people that accompanied the colonisation of Australia, check out our article here.

[1] National Archives - Transcript of the findings of the ‘Board of Enquiry concerning the killing of natives in Central Australia by Police Parties and others, and concerning other matters.’ Commonwealth of Australia, 18 January 1929.