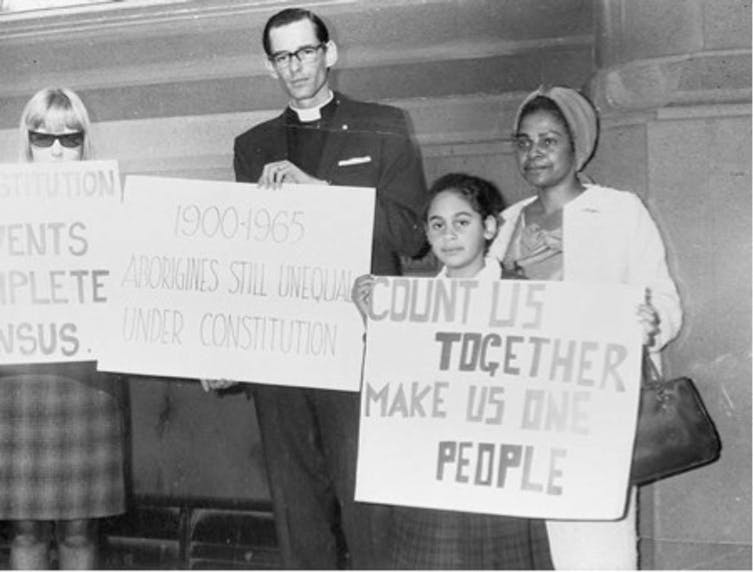 What was the referendum about?

On 27 May, 1967, an overwhelming majority of Australian citizens voted “yes” in a national referendum to amend clauses of the Australian Constitution concerning First Nations people. Campaigners for the “yes” vote successfully argued that those references were discriminatory and excluded First Nations people from citizenship.

The referendum secured the amendment of Section 51 (xxvi) and the removal of Section 127. The former section specified the federal parliament could make laws with respect to:

“...people of any race, other than the Aboriginal race in any state, for whom it is deemed necessary to make special laws.”

The words in bold were removed. The latter section stated that in:

The historic decision has been remembered by some as the moment First Nations people won equal rights, including the right to vote and equal wages.

But this was not necessarily the case. First Nations voting rights had been clarified by the government five years earlier while the extension of award wages to First Nations people occurred in 1968 as a result of actions unrelated to the referendum.

Though the referendum did not end legal discrimination or lead to parity between First Nations and non-Indigenous people in social, economic and health status, it was the catalyst for some significant legislation and has been of undeniable symbolic significance. In a sense the referendum has come to represent, as a form of historical shorthand, a decade of change from the early 1960s to the early 1970s.

How was the campaign run?

The campaigners for a “yes” vote sought the inclusion of First Nations people as respected members of the national community. Their campaign was based on the idea that equality for First Nations people didn’t sit in the hands of parliament – rather it relied on their experiences in their communities and receiving respect from all Australians.

The amendment to the constitution was an important step in this, but the “Yes” campaign focused more on asking Australians to welcome First Nations people into their communities and calling for the fellowship of the nation.

“Vote ‘Yes’ for Aborigines, they want to be Australians too.”

The triumph of the “Yes”’ vote was primarily a symbolic victory, as rights such as the right to vote already technically existed for First Nations people.

Though the referendum revealed a desire to extend equal rights to First Nations people, it did not guarantee equality. It enabled the federal government to pass the Land Rights Act (1976) which has benefited many First Nations people, however it has also been used to enact laws that eroded their rights.

For example, it enabled “The Intervention” (or Northern Territory Emergency Response) - an almost authoritarian scheme that was passed without proper consultation with the communities it affected. The lives of First Nations people were heavily regulated through the legislation, which included the exclusion of First Nations people from the protection of the Racial Discrimination Act (1975).