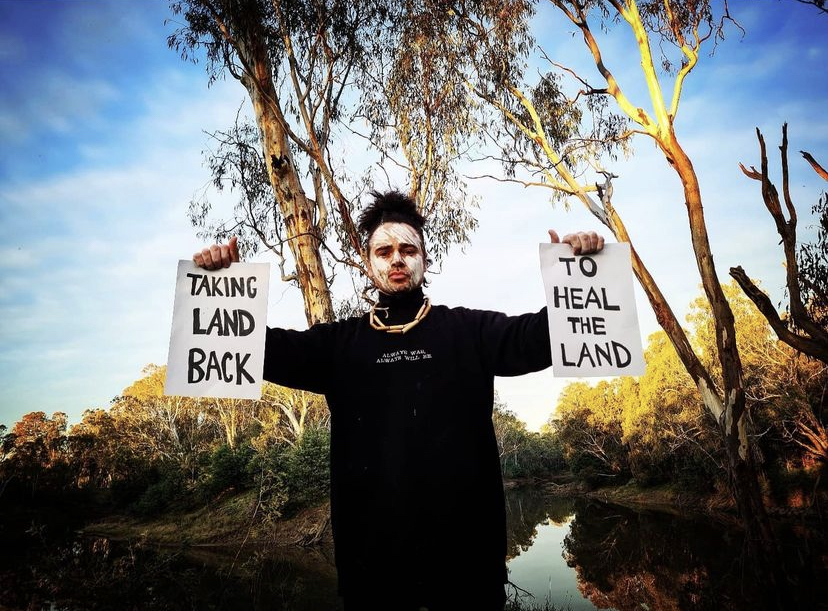 Land Back is More Than a Phrase

This article is part of a series on land back. Questions and answers may have been edited for length and clarity.

Neil Morris is a Yorta Yorta, DjaDja Wurrung, Ngurai Illum Wurrung and Wiradjuri Custodian. He grew up on Country (Yorta Yorta) and is deeply connected to culture and community. Neil is also the musician and songwriter behind DRMNGNOW (pronounced Dreaming now) and Executive Director of Still Here Arts & Culture. He uses song and storytelling to bring people together, remind us of our inherent custodianship, and advocate for the protection of Country.

We yarned to Neil about what land back means to him and what a land back future could look like.

1. What does land back mean to you?

Neil: “Land back is a relationship for me. It’s about how I relate to my role as a custodian. And what does that look like? What are the things that I need to commit to as part of that? Granted sometimes I don’t have the privileges to be able to commit to that to the fullest. But you know, I do live on Country and I was born on Country. And that gives me certain privileges in terms of my connection to Country. That's just a real blessing. I know not all Mob have the privilege of living on Country. But we’re still an extension of the land. We still sit in relationship to land back.

So how much are we honouring Country as Indigenous people? What can we do on a day-to-day basis? Every single day I ask myself, “what am I doing for land back?” Living in a western society, there are a lot of days that can pass and it feels like we’re not doing anything for Country. But simply by existing – with intention and openness to our fullest roles as custodians – we’re doing something. So in that sense our existence alone is a form of land back.”

2. You’ve said in a social media post before that land back is a must, not a slogan. Can you tell us more about this?

It's a big belief of mine that if humanity is to survive, Indigeneity has to become central. There's just no way around that. So eventually, these conversations are going to be in the middle of the most important places for discussion in all human societies. It might not be now, but it could be 50 years down the track where you’ve even got Liberal MPs talking about, what’s their role in land back.

3. What could land back and First Nations land governance look like?

Neil: “Land back will depend on what mob want in their own community. If you give mob autonomous leadership rights over their Country, the version of what land back will look like on one mob’s Country to the next will be different. It’s influenced by the Country itself. For example, you’ve got Country where the rivers are drying up like the Barka [Darling River], so that’s going to influence how land back can function in terms of access to water and resources to actually survive and live in certain townships.

To me, one of the most important things about land back and Indigenous governance and sovereignty, is safety for Indigenous people. Without our sovereignty being endorsed and understood, then there’s risk to the safety of our people. Safety existing on a physical, spiritual and every plain of being. In an ideal circumstance, we’ll get to a point where First Nations people don’t have to look over our shoulders – whether that’s to do with policing or park rangers fining Blackfullas for practicing culture. A point in time where everyone knows their place in the system. Land back for me is about answering, how does Indigenous leadership adequately function on these lands, in the ways that it has for 80,000+ years? It will look different from community to community.”

Neil: “Well I would say that that’s certainly not the case. Indigenous liberation is definitely not just for Indigenous people – broadly it’s justice, and humanity is doomed without justice. A sovereign-led future and land back is a path to a place where everyone can have the best chance to have the most equitable and happy life.

Happiness is different things to different people. But for mob, our happiness also depends on what we’re leaving behind. And that’s how every human should think. It’s not cool to not think of future generations. If you get to live in an air-conditioned mansion, but that means your great-great-great-great-great-grandchildren can’t have that, then I feel that’s not right. We have inherent responsibilities to consider. We can’t side-step these things because we live on a planet with finite resources.

5. How can non-Indigenous allies back land back?

Neil: “There’s a lot of conversations that people need to keep having. There’s a lot of work for whitefellas to do - to check their own people. And in our own community – we need to make sure we’re staying grounded as well. And that our ideals of success stay grounded in Indigenous thought and not western thought. Which given incessant colonial pressures, that means we have a real systemic battle on our hands constantly and that is not lost on me.

Any human needs to think of how they relate back to what the greatest longevity of humanity looks like, in a way that enables the greatest quality of life for every single human. As Indigenous people, we have an opportunity to lead and drive that narrative.

I envision a world where people don’t just have the bare minimum. I envision a world where everybody has everything they need to have a deadly life. For me, for instance, as a musician I believe everybody has a right to have what they need to be the best they can at music. Whatever people want to excel at, I believe they have a human right – within the fair distribution of the wealth of humanity – to be able to pursue excellence and be the best that they can be.”

6. Any final words about land back?

Neil: “Land back is about planting the seeds for the optimum quality of humanity to exist. That’s it in a nutshell. Land back isn’t all going to happen at once. It’s the actual transfer of land back to Indigenous people – small-scale commitment for every single Indigenous mob across the country – and to a certain extent it’s already occurring. A lot of it is relationship-led.

So it doesn’t necessarily have to be tomorrow, everybody’s got to sign all their land deeds over to mob. And suddenly everyone’s impoverished. I can’t even imagine it because mob – we get wild because we’re human – but we’re not just gonna leave people starving around and homeless. We’re going to try to work something out for people to get by. Our cultures are not driven to create destitution for anyone, so a land back model isn’t going to cause this.

There's a variety of ways you can go about land back. And there’s a lot of evidence showing why it’s the right way forward. For me now, it’s undeniable that land back will be successful. And this isn’t to say that every land back initiative will work out deadly straight away. We’ve got to be realistic. Indigenous people have been colonised for 250 years and it’s still ongoing, so if some things don’t work immediately people can’t turn around and say, “well we tried that and it didn’t work out.”

It might take a while to get this right. There needs to be some level of understanding of this, and a sense of patience too, like we’ve had patience for 250 years. Give us at least 50 years. Although I don’t believe it will take 50 years for things to be deadly, because we’re coming from that good place. We’re coming from a place of love. Like our cultures have always been."

Land Back and Language