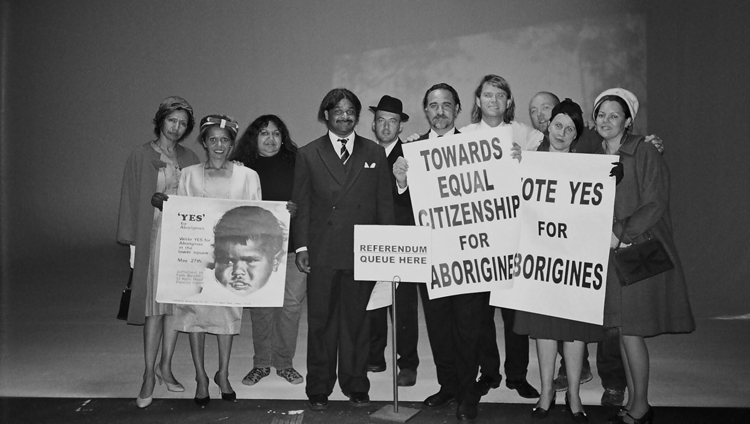 The historic 1967 referendum is viewed by most to be a significant landmark in the history of race relations in Australia. It also remains a much-misunderstood moment in history with many still believing it was at that point that Aborigines gained the vote. It wasn’t. Numerous other misconceptions abound, some of which are being resurrected in the present-day push for so-called constitutional recognition. Consequently, it is timely to revisit whether the 1967 referendum really brought about meaningful positive change for Aboriginal people or not.

In the immediate aftermath of the 1967 referendum, Aboriginal people perceived very little change in the day-to-day, high level of racist attitudes being experienced. Apart from New South Wales there appeared to be no real change in state or federal government policies on Aboriginal affairs. The exception, as stated, was in New South Wales where the government apparently in a fit of pique, chose to suddenly and arbitrarily abolish the hated Aborigines Welfare Board which had administered the bureaucratic infrastructure of the NSW version of apartheid.

This abrupt move by the New South Wales government had effectively left approximately 50,000 Aboriginal people around the State, overnight, deprived any form of government assistance. This was an appalling situation at a time when there was a rural recession in New South Wales and thus there was no work in the rural areas even for white workers. This led to the mass exodus from rural areas as Aboriginal families were forced to relocate to metropolitan areas in quest of work. This in turn meant that the Aboriginal population in Redfern, Sydney exploded from a population of around 1500 in 1966 to around 35,000 over the next three years.

Redfern as a result became the largest Aboriginal community in Australia, but with all the same problems of poor health, poor housing and racism that they had experienced under the old apartheid system back on the reserves. In the big Black ghetto of Redfern, these problems were compounded by an apparently deliberate campaign of harassment and intimidation of its newest residents by the New Sought Wales Police, through the operation of a notorious squad known as the 21 Division. Consequently,  as a result of both the issue of police brutality and the perceived failure of 1967 referendum, a younger generation of more radical Aboriginal activists emerged, and the Australian Black Power movement was born.

The activists of the Black Power movement had three basic aims. land rights and economic and political independence for all surviving Aboriginal nations. We drew inspiration from a wide range of historical and political precedents, including independence movements in a decolonising Africa, Vietnam, Cuba and China, as well as the American civil rights and Native American movements. It was the Black Power movement that created the first Aboriginal community-controlled legal, medical,  housing and children’s services. The Black Power activists were also more confrontational in their approach to state and federal government, which in turn led to the most successful Aboriginal political protest action of the entire twentieth century – the 1972 Aboriginal Embassy.

So, from an Aboriginal perspective, the 1967 Referendum might be seen as a monumental failure in terms of bringing about any immediate or meaningful change in the status or situation of Aboriginal people. As I sit here 55 years later, the ongoing incarceration rates of Aboriginal people point to everything you need to know about whether the referendum did much good for us.

This was despite the enormous historic significance of the referendum which was one of the first in Australian history where there had been a “yes” vote. Furthermore, it remains the largest “yes” vote in history. More than 90 per cent of the nation had expressed their desire that their political leaders do something to improve the situation of Aboriginal peoples. The successful campaign for the historic “yes” vote had taken more than a decade and had been coordinated by such great campaigners of the calibre of Faith Bandler, Joe McGuinness, Ken Brindle, Dulcie Flower and John Newfong. The subsequent failure of the referendum was an enormous disappointment to those campaigners and was ultimately due to the lack of political will in Canberra which was documented in recent years by former Secretary of the Office of Aboriginal Affairs, Barrie Dexter, in his autobiography Pandora’s Box.

So, what are the lessons of history for today’s advocates of constitutional change that would require another successful “yes” vote in a referendum? Surely the first lesson is that changing a few words in the constitution guarantees nothing in terms of meaningful social, political, and economic improvement for Aboriginal peoples. What is clear in the wake of the 1967 referendum campaign is that lawful discrimination did not end and the Federal Government did not have the political will to change this, in spite of changes to the Constitution.

So, one question for today's advocates on another referendum must be: on what basis do you think your constitutional amendment will bring immediate and meaningful change to the lives of Aboriginal peoples? Where is the evidence that it will? And if the existing historical evidence shows that it will not, then why waste so much energy and money trying to achieve it?

A second lesson to be learned from 1967 is that, as already stated, the campaign back then for a “yes” vote had taken ten years and an army of committed campaigners. More importantly, it occurred at a moment in Australian history when there was a considerable reservoir of goodwill toward Aboriginal people on the part of many ordinary Australians. Ironically, this was at the same time as state and federal governments maintained repressive Aboriginal affairs regimes and policies which had their origins in notions of white supremacy going back to the nineteenth century.

Despite these contradictions, the 1967 vote caught many by surprise. Nobody had expected anywhere near the size of the “yes” vote, so in the aftermath campaigners celebrated Their expectations for the future were high, but it didn’t take too long for their bubble to burst. The point regarding the campaign in 1967, which took place over a decade and clearly captured the public imagination remains in contrast to the present-day campaign which is barely understood by most Aboriginal people, let alone the broader public.

Also inherent in the second lesson is the point that there had been that reservoir of goodwill in the broader Australian community, the reasons for which were complex and varied, but it clearly existed as the vote showed. Such a reservoir of goodwill is vital in getting a successful vote in a referendum, and an important question to consider is, does that reserve of goodwill exist today? My contention is a blunt “NO!”

In the decades since 1967, we have seen a considerable hardening of racial attitudes in white Australia. With the emergence from the shadows of right-wing, racist extremism into mainstream politics in the 1990s led by Pauline Hanson’s One Nation Party, and fired up in academic circles by denialist historians such as Geoffrey Blainey and pretend historians such as Keith Windschuttle who triggered the so-called “history war” on campuses Australia wide. Add to that the persistent anti-Aboriginal campaigns of the past two decades by the Murdoch-owned media and we have ended up with a nation whose racial attitudes have gone backwards over the past thirst years. We should not be fooled by the superficial token gestures like those that abound today in political rhetoric, but rather monitor the racial stereotyping that we constantly experience daily and which dominates the mainstream and social media we absorb.

To put it in more simple terms, there is absolutely no way that in 2022 Australia, anyone could muster the minimum 75 per cent “yes” vote needed to achieve constitutional change. There is not that level of support for Aboriginal rights in the Australian community anymore. The people pushing constitutional change surely must realise this. There are politicians in Canberra who clearly understand this and would probably be only too happy to support a referendum they know will ultimately fail.

In the end, I would expect that the push for constitutional change will burn bright for a short while but will ultimately fizzle out like a skyrocket on cracker night. The lessons are there from 1967 for all to see. So if people pay attention to history then maybe 55 years later something positive may come from that earlier disappointing outcome of the referendum.

This is an opinion piece written by Dr Gary Foley.