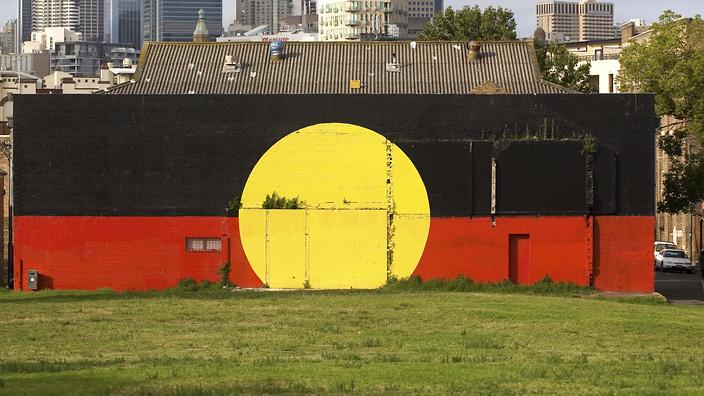 The Aboriginal flag was designed by Harold Thomas in 1971. It has become a symbol of unity and strength for First Nations people. The three colours represent the things important to a proud people.

This illustrates the red earth, and the red ochre used in ceremonies. The red represents  Aboriginal peoples’ spiritual relation to the land.

The black represents the Aboriginal people of Australia.

This represents the sun - the giver of life and protector.

It was first flown at Victoria Square in Adelaide on National Aborigines* Day, 9 July 1971. The following year it became the official flag for the Aboriginal Tent Embassy in Canberra after it was first flown there in 1972. As time has passed, it has become a widely recognised symbol of the unity of Aboriginal people. *This term is now considered outdated and offensive.

Since the 1970s, the Aboriginal flag has been shown with pride at political rallies, sporting events, and when celebrations are held across the country. It is often a permanent fixture outside important buildings across Australia to recognise and pay respect to the First Nations people.

In 1994 the Commonwealth took steps to give the flag legal recognition. Following public consultation on the matter, the Aboriginal flag was proclaimed a ‘Flag of Australia’ in July 1995 under the Flags Act 1953.

Although you don't need permission to fly the Aboriginal flag, you must get permission to reproduce it for commercial purposes and sell it.

Watch this video Living Black looks at the Aboriginal Flag.

Copyright and the Aboriginal Flag

The Aboriginal Flag licence is held by non-Indigenous companies, not by First Nations people. There has been an ongoing struggle for First Nations people to use the flag, since an exclusive world-wide licence was transferred from Harold Thomas to WAM Clothing in October 2018 to reproduce the Flag on clothing. Over recent years, WAM Clothing has issued cease and desist notices to companies including the AFL, who use the flag during its Indigenous round on club jerseys.

Check out the Free the Flag campaign being run by Clothing the Gaps, who have launched an online petition calling for the copyright arrangements to be changed.