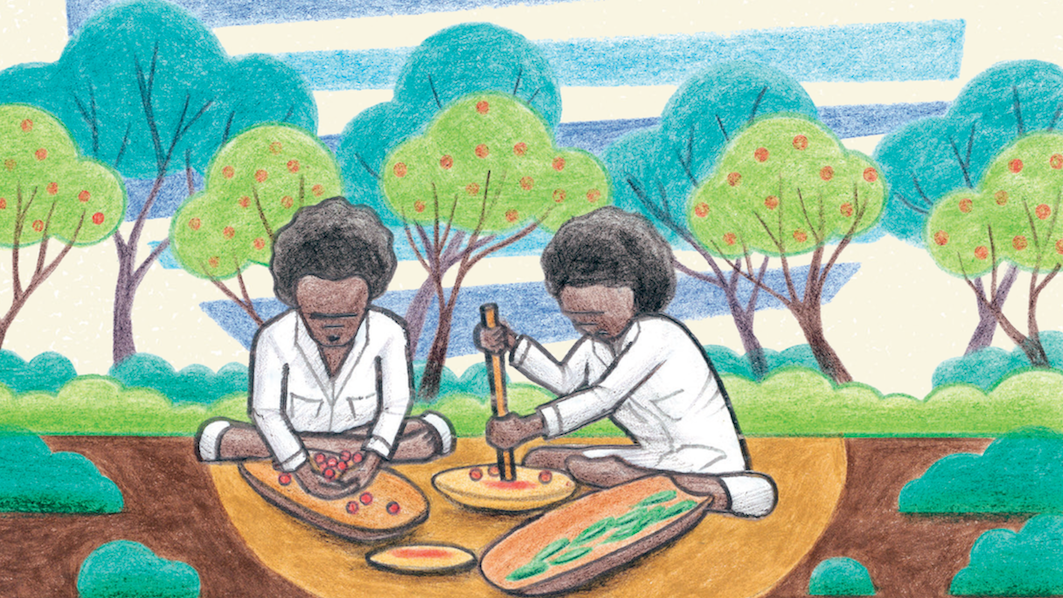 The following article is an extract from The First Scientists: Deadly Inventions and Innovations from Australia's First Peoples. The First Scientists has been written by Corey Tutt - a proud Kamilaroi man and the founding CEO of DeadlyScience. The book has been illustrated by Blak Douglas. You’ll see some of his vibrant illustrations in this article.

The first scientists across the land looked to the skies. They asked questions and found answers there. Whether it was finding food or predicting the weather, the stars and the sky played an important role in culture and how we understood and continue to understand the world.

Today, over 500 different nations and clans in Australia still maintain a relationship with the sky. We look to the skies as a familiar friend. There we find answers to the same questions the first scientists asked.

Nations across Australia use the stars as a guide for hunting. The people in Pitjantjatjara Country use the Seven Sisters star cluster (the Pleiades) to predict when the winter frosts will begin, and to understand the behaviour of animals. When the cluster of stars rises at dawn in June, dingoes begin having their pups.

The Boorong people know that when the star Marpeankurruk (Arcturus) is visible high in the night sky in August, the larvae of the wood ant can be found under logs and stones. These larvae are high in protein and can survive harsh droughts. It is eaten both cooked and raw until September, when the star sets at dusk.

When gardens are planted, the first scientists read the stars to predict the right time to harvest the food.

The Yolŋu people observe a bright red star called Arcturus as a sign that it is time to collect räkay (spike rush). This plant  can be used to make baskets and fish traps. It’s also a food source. How deadly is that! Räkay is full of carbohydrates, which help produce energy and are part of a healthy diet. The root of the räkay can be eaten raw or roasted. It’s also a favourite food for the magpie goose.

In the Torres Strait, Islanders plant yams each year. Yams are like sweet potatoes, and when the ‘yam star’ rises at dawn, the Islanders know that it’s time to harvest them. This happens in late March, towards the end of the kuki (wet season).

The yam star is called Kek in the Kalau Lagau Ya language. It is the star astronomers call Achernar. When the Islanders see it, they know the sager (dry season) is coming, so they hold a special ceremony.

You may have been taught that the first scientists were just hunter-gatherers, but in fact they were some of the greatest minds of their time.

Across Australia there is evidence of tools and engineering feats that are as old as time. Some of them are still used today, from boomerangs and the ever-effective fish traps, while some are the basis for modern materials like bioplastics.

Tools and weapons were carefully designed and refined to work the land to the first scientists’s advantage. Today, we have many technological advances, but the voices and designs of the first engineers still remain, and are passed on from generation to generation.

Did you know that the first scientists invented what we now know as glue? Yes, glue! But we call it resin.

In the desert the Anangu people use resin to bind tools together to make them stronger or more practical. To create the glue, they use the sticky sap from spinifex grass. They heat the base of the grass over a fire and then allow it to cool down naturally. This turns the base into a liquid superglue-like substance which they call kiti.

The Yidinji people make their own resin by mixing parts of the grass tree with the wax from native bees, sand and ash. This creates a cement-like substance that can be used to create structures like huts and fish traps, or to glue sharp arrows onto spears and tools, which are then used for hunting and building.

Resin is also used to waterproof bowls. The people of the Kulin Nation make containers from bark to carry water, and seal the outside with resin. To create strong handles, they use the softer inner layer of bark. It is twisted and tied to create rope, which is then sealed with resin. These bucket-like water containers are called tarnuks.

Today, scientists are learning from the first engineers to create friendly plastics and glues. The University of Queensland has been working with Traditional Owners to create renewable, sustainable materials from spinifex grass. This is important. As we deal with the effects of climate change, we need to find better ways to look after our planet. Plastics never completely break down, and if we can create more sustainable and biodegradable plastics it means less ends up undecomposed in our oceans and in landfill.

The first scientists not only cared for Country but they also had the ability to notice small changes in the landscape. It’s this attention to detail that has served First Nations peoples for over [80,000] years. In modern times this expertise has often been called on by law enforcement and governments to help find people or animals lost in the bush.

While it’s not quite the forensic science you see in spy movies, you’ll soon discover how deadly the first forensic scientists are, and how their knowledge is still used today to protect some of our amazing animals.

Sometimes when people become lost in the bush the local rescuers will enlist the help of First Nations people. They notice small changes that others miss, like footprints in the sand, or dirt shifted in a certain way, or even different smells.

These trackers were heroes who saved many people who became lost. In August 1864 on Wimmera Country, two Whadjuk people were employed as bush trackers to find the Duff kids – Isaac Cooper (aged 9), Jane Cooper (aged 7) and  Frank Duff (aged 3) who were lost in the bush for nine winter days. This was well before the days of GPS and emergency beacons.

The first scientists never needed to go to the chemist. They created and produced their own incredible bush medicines by blending plants and animals to create remedies that treated illness and injuries. Some of these medicines are among the oldest in the world, and are still used today. Maybe next time you’re at the shops you can try to spot some of the first scientists’ medicine.

The first scientists were incredible artists who developed rock paints made from natural ochre and carefully selected barks. These paints were used to communicate stories and records of what was seen. They were like the first ever computer hard drive!

To this day, some of these paintings still exist tens of thousands of years later. How have they survived? Well, the first chemists had a trick to ensure the paintings lasted so that knowledge could be passed down. They collected eggs from birds and reptiles because egg yolks contain a natural glue. They mixed the yolk with the paint which then sealed it onto the surface, preserving it.

To put this into perspective, Leonardo da Vinci’s Mona Lisa, one of the world’s most famous paintings, is about 515 years old. It needs to be kept in a climate-controlled environment to make sure it survives, whereas the first chemists’ paintings have lasted through all kinds of weather. Some paintings are over 40,000 years old!

These paintings also record species that no longer exist, like giant megafauna and Tasmanian tigers on the mainland of Australia. Even though those animals are no longer with us, we can thank the first scientists for showing us that they once were.

The first scientists had a deep belief that if you cared for Country, the Country would care for you. They practised land management techniques which were passed down from Elders, and adapted. Some of these techniques are still alive today, while others have been revived.

In 2020, during the devastating bushfire season, important conversations were had about the first scientists and the way they managed the land. The importance of culture started to flower again.

For over [80,000] years, the first scientists carefully managed the land with fire.

Fire has been a part of storytelling and culture for many generations. It is used as a tool to promote healing of plants and trees.

The first scientists used cool burns to help regenerate the bush. This happened at different times of the day and night, depending on what type of Country was being burnt and in what season. Plants can be more flammable during the summer season because of the dry conditions.

During the day when it’s hot, plants sweat out flammable oils, but during the night they produce dew. Burning at the right time when the plants are less flammable helps make the fire manageable.

First Nations fire management keeps the Country balanced by reducing the density of plants. This allows a greater variety of plants to grow and establish themselves. This in turn creates homes and food sources for many different animals.

For First Nations people, [the Dreaming] relates to the animals that have inhabited Australia for thousands of years. These animals relied on the first scientists to care for them and ensure their home was safe.

The first scientists had rules around hunting and fishing. They were very simple. You only took what you needed, and you released what you didn’t need. This prevented the animals from dying out so that there was still food for future generations. Today more than ever, these rules are needed as the oceans are running out of fish and species are becoming extinct.

Across Australia, descendants of the first scientists are waging a battle against plastic waste and climate change, which are both enemies of animals.

Seed Mob, an organisation of young First Nations people and scientists, is taking on the mess made by humans. They are standing strong to protect our environment by raising awareness about the impacts of climate change on First Nations people. They also campaign for governments and big business to reduce carbon emissions to help protect the oceans and our planet.

Turtles and other animals often mistake plastics for their natural food sources. This is a serious problem because these animals are unable to digest plastic and often become sick and die. Across the Torres Strait Islands, from Poruma Island, young deadly scientists have been collecting rubbish and litter to prevent it from going into the oceans. They are protecting animals for the next generation – this is modern-day caring for Country. Now that is crazy deadly!