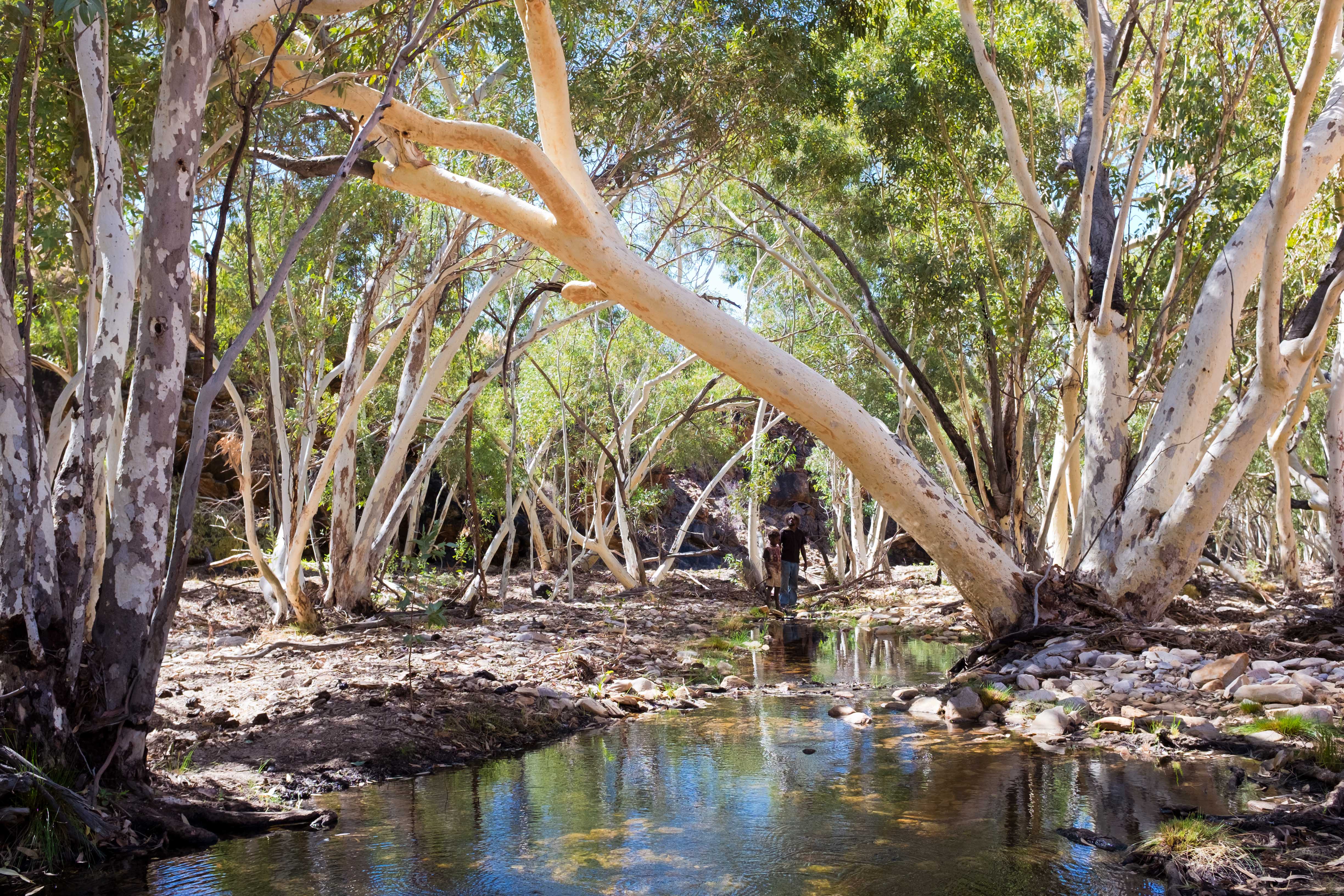 However, often the ways that First Nations identities are explained and defined have not been created by First Nations people. Often they have been constructed and imposed by white Australia. Australia’s own government records show its definition of what it means to be a First Nations person has been altered 67 times. Today there is a three-part definition:

The three-tier test was never intended to become a universal model for First Nations identity. It was meant to serve as a legal definition. However, its widespread use in policy and assessment has given it authority in both non-Indigenous and First Nations spaces. While the three-part definition may be helpful for legal matters and the thinking of non-Indigenous people, it can be harmful to the diverse identities of First Nations peoples. From First Nations perspectives, there are other things considered key to our identity:

Country, or land, is fundamental to First Nations identities. For First Nations people, land is more than the physical environment. It embodies all aspects of First Nations existence - culture, language, spirituality and law. The words ‘Country’ or ‘nation’ are often used to refer to an individual's ancestral lands and seas. In Australia there are hundreds of distinct nations and peoples, each with their own law and language. They are geographically separated by age-old boundaries defined by kinship and trade. While this creates diversity among First Nations identities, connection to and caring for Country is a common thread. One that is woven through the unique customs, ceremonies and traditions of every nation.

In his book, Talking To My Country, Wiradjuri man and journalist, Stan Grant, says, “I want to tell you about blood and bone and how mine is buried deep in this land.” This speaks to the intrinsic sacredness and deep sense of belonging a First Nations person feels when on Country. It also embodies the nature of First Nations custodianship - we don’t own the land; the land owns us. Throughout the book, Grant talks to Australia as if it were a person. This is another characteristic of First Nations collective identity – seeing Country as mother – continuously learning from and protecting her. And she cares for her people in return.

Worimi and Gumbaynggirr Elder, Aunty Lyn Davis, says, “to be Aboriginal is to feel the oldness of the trees, to truly hear the birds when they sing. It is to live with Country - to live as Country.”  Aunty Lyn believes, “when our connection to land is severed, we are people without purpose.” When First Nations people are deprived of or forcibly removed from their traditional lands, their health and wellbeing suffer. The intergenerational trauma caused by land theft contributes to the burden of disease and high incarceration rates of First Nations people because it continues to disrupt connection to Country.

‘Mob’ is a colloquial term identifying a First Nations community or group linked to a particular place or Country. Mobs are generally larger than families but are based on family links through common ancestry. Connection to mob underpins First Nations identities, as First Nations groups are culturally collectivist. This means First Nations people think of themselves in terms of their affiliation with community, thereby contrasting with individualism.

Worimi Elder, Aunty Donna Hall, says connection to mob is imperative to the empowerment and fulfilment of First Nations people. Aunty Donna says, “we know who our aunties and uncles are. We know our cousins – first, second and third. We know every branch, twig and leaf on our family tree. Non-Indigenous people find it hard to relate to that.” She also speaks of her duty as an Elder, “to be an Elder is to be a storyteller – a keeper and sharer of knowledge. It is to be respected by our young ones and to be the heart of our extended families.”

Aunty Lyn also identifies community connection as a pillar of First Nations identities. Aunty Lyn grew up in Biripi Country on an Aboriginal reserve. She says, “we were a self-sufficient community. Some of the men were fishermen. Our houses were built by our dads and pops.” She says her time on the reserve was not without its struggles, but the community was fiercely united, “we all cared for each other. We all shared. The Elders looked after us.” Aunty Lyn is grateful there was always food on the table, despite being poor. “Mum would make damper and johnny cakes. Dad had a vegetable garden and we would share with our neighbours.” This abundance of food is symptomatic of First Nations collectivism – always prioritising the needs of mob.

First Nations people have an ongoing relationship with the ancestor spirits. To not know your Ancestors is to feel disempowered and disconnected. For First Nations people, connecting to the Ancestors is not confined to one’s family lineage. Rather, it encompasses First Nations spirituality and the interconnectedness of plants, animals, landforms and celestial bodies. The creation Ancestors sculptured the Earth’s formations and established the ways in which all things should live and relate to one another to maintain order and sustainability.

Bundjalung media and cultural theorist, Dakota Feirer, mentions his love of a quote from Dujuan in In My Blood It Runs. “I was born an Aboriginal kid. That means that I was born with a memory.” Feirer says this has dual meaning for him. “On one hand, we are born with a deeply innate connection to the land and to Ancestors – this connection is the reason we feel safe and empowered when we engage with and enact our culture. On the other hand, we are born inheriting the trauma that comes with intergenerational displacement from Country and removal from culture.”

As a matter of survival, some families may have concealed their Aboriginality. This means some First Nations people have little knowledge about their family lineage and kinship structures. Even still, connecting to the Ancestors is possible and often inevitable. In the words of Stan Grant, “The past is alive in me now. Its wounds rest deep and uneasily in our soul. I am the sum of many things, but I am all history.” It is common for First Nations people to feel like they are walking in the footprints of their Ancestors or standing on the shoulders of their Elders past and present.

But what about colour?

For Dakota, growing up off Country added yet another layer to this confusion of identity. He says, “I had to interpret my Aboriginality being fair-skinned and ‘not from here’, an added element of displacement. It was a deep internal trauma that I was unconscious to, and one which became fuelled by constant questions of my ‘caste’ or ‘percentage’ of Aboriginality. As I grew older, I became surrounded by strong Aboriginal mentors who would remind me that ‘no matter how much milk you add, coffee is still coffee.”

As diverse as they are, it is important to understand that connection, not colour, is at the heart of First Nations identities. While it is important for fair-skinned mob to acknowledge their privilege, the notions of First Nations identities are far deeper than skin surface. To be a First Nations person is to feel deeply connected to Country, to mob and to Ancestors. It is to be a product of the oldest continuing culture in the world, existing within and fighting against a system built on the disruption of that very culture.