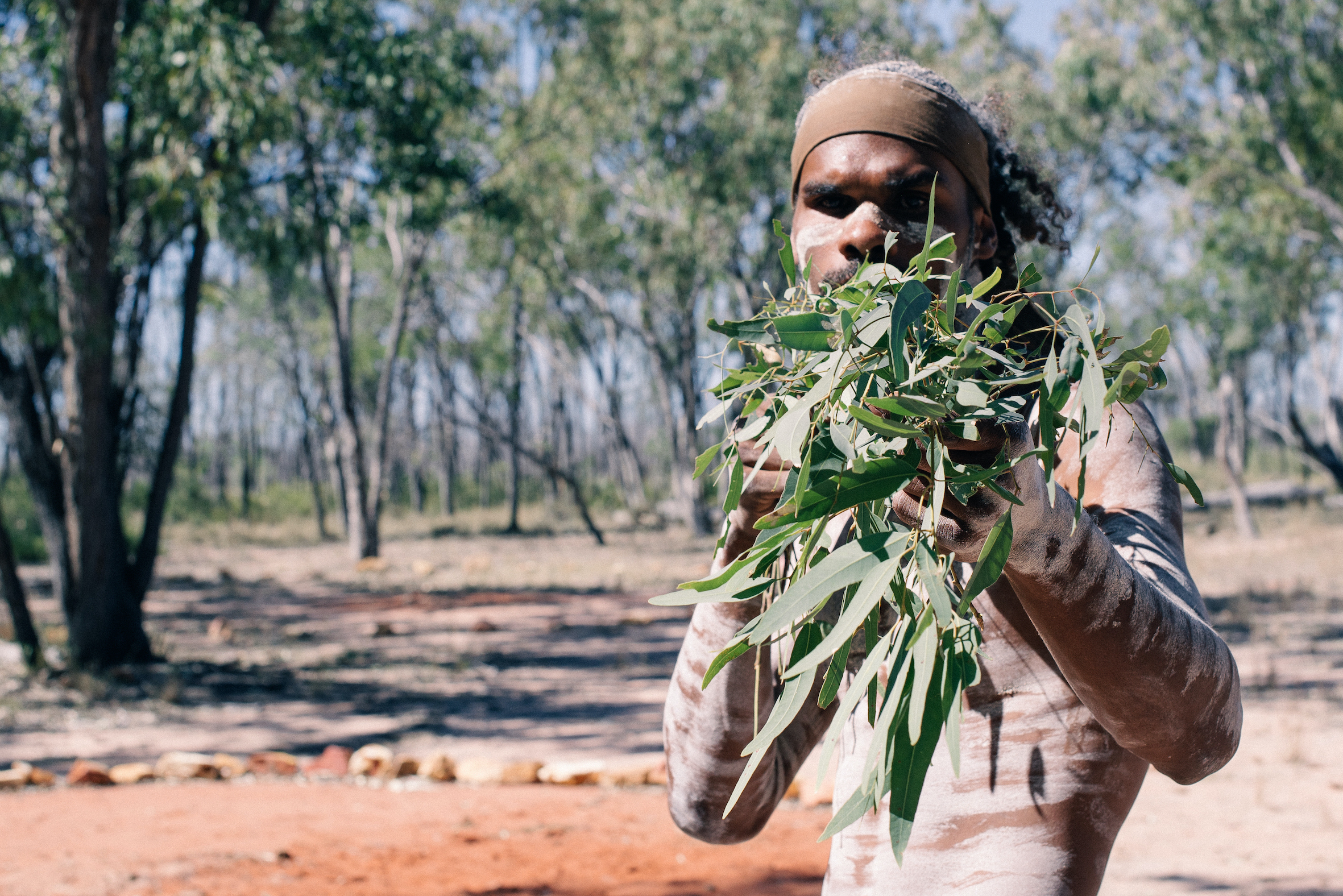 W&J Standing Our Ground is a group of sovereign Wangan and Jagalingou people who maintain a constant presence on Country to care for their sacred lands and waters. Wangan and Jagalingou Country is located in the Galilee Basin - a thermal coal basin in Central Queensland that Adani is determined to mine. But Traditional Owners are even more determined. Meet some of them in this photo essay.

Coedie is the person behind Waddananggu, a cultural ceremony taking place across the road from Adani’s Carmichael Mine - the biggest coal mine in this continent’s history. While Waddananggu is ceremony, it is also a fight, as Coedie and his family fight for their human rights to practice culture on Country.

Coedie wants to inspire other First Nations to create their own flags, because he believes it’s the first step towards sovereignty and self-determination. “I myself don't personally subscribe to the Aboriginal flag. I subscribe to my own flag. Our flag is open to changes. It's not set in stone. It's just a representation of us. And it creates individualism - that we're a separate Nation inside a collective group of other tribal Nations on this continent,” he says.

“We are not all the same. We have our separate Nations and our separate Law, which must be respected. But we all come from one continent. And we are all Blackfullas. That’s what brings us together.”

This is Coedie. He’s sitting inside the Bora ring he prepared for Waddananggu. Since the ceremony began on 26 August 2021, at least one Wangan and Jagalingou warrior has been inside the circle at all times, tending to the sacred fire. The ceremony is legal under western law (Human Rights Act 2019), and the Queensland Police Service has agreed to not remove Coedie and his family from their Country.

Behind him is a line of humpies (small shelters that have been made by First Nations people since time immemorial). These are the embassies of other First Nations, built by people who have traveled from their homelands to participate in Waddananggu.

Coedie believes no one can deny us of our right to practice culture. He says First Nations cultures are progressive and evolving, and we can rebuild our cultures exactly how we want and with purpose.‍

Adani (who renamed their Australian group Bravus in 2020) began construction of the Carmichael Mine in June 2019, after almost a decade of political controversy, protests and resistance from Traditional Owners.

The initial Carmichael Coal Mine and Rail Project plan included both open-cut and underground mines expected to produce 60 million tonnes of coal per year. But thanks to First Nations strength and resilience, and grassroots movements like Stop Adani, Adani was unable to entice funders for the project and downsized significantly.

Even still, it’s one of the world’s biggest fossil fuel projects at a time when the climate science is clear: fossil fuel reserves need to stay in the ground to escape the worst of the climate crisis, and protect places like the Great Barrier Reef for future generations.

For Wangan and Jagalingou people, the impact of the Carmichael Mine goes beyond its contribution to global warming. The open-cut pit is an abuse on Country. The explosions disrupt the Ancestor spirits, and destroy sacred sites and artefacts. And Adani’s extraction of huge volumes of groundwater is extremely dangerous for the Doongmabulla Springs.

Meet Nathan Baira. Nathan is a Wangan and Jagalingou custodian with connections to Wakka Wakka Country, Gumbaynggirr Country and the Torres Strait Islands. Painted up in white ochre, he’s standing strong on high ground near the sacred Doongmabulla Springs.

The Doongmabulla Springs are central to Wangan and Jagalingou Dreaming. They are the final resting place of Mundangarra, the Rainbow Serpent. A Creation Ancestor, Mundangarra shaped the mountains and rivers, creating the landscapes and ecosystems.

“We’re here, on our Country, to protect the Doongmabulla Springs. That’s where our Dreaming is, that’s where we were created. It’s really sacred water, it’s healing water... You see things here - out in the bush, Doongmabulla - it is amazing,” Nathan says.

Doongmabulla Springs is located on a pastoral lease. So for Nathan to visit the sacred site, his Dreaming, he has to pass through Doongmabulla Cattle Station and talk to the lease holder.

“I just went up to the mate and said nicely, “hey I’m here to see my sacred sites. I’m just here to let you know, I’m going on my Country.” I’m not going to ask anybody for permission to walk on my Country. And as Blackfullas, you mob shouldn’t ask anyone either. You go on your Country and you practice your culture.” - Nathan Baira.

Darian Age is the youngest Wangan and Jagalingou warrior we met at Waddanganggu. But his knowledge of culture and story runs deep, as old as time.

In the photo, Darian is riding his bike on the public road between Adani’s coal mine and Waddananggu. In the distance, Adani security watches him from the car.

Adani security maintains a constant presence here, watching the people, camp and ceremony at all times. Adani has a history of using intimidation tactics to make Traditional Owners feel like trespassers on their own Country.

Here Nathan and Darian are standing in what they call “the footprint” because the area looks like a footprint from aerial view. Behind them is the Wangan and Jagalingou Flag.

“So right now, we’re in the foot. It literally looks like a foot from Google Maps. We’re in a really sacred spot here… Around here there’s all scar trees,” Nathan says.

The energy in this place is strong. Nathan and Darian say the spirits of the Old People are especially felt and noticed here. “When I’m out on Country, it’s a feeling that, you know, a Murri and a Blackfulla can only understand. When you come out on Country and you connect to Country, you feel it. You feel your Ancestors,” Nathan says.

This location is also covered by pastoral lease. It’s where Coedie and his family set up a corroboree ground in an effort to connect with and console the Ancestors before Adani began construction of the mine.

“When you come out here, you start Dreaming - when you do shake-a-leg, when you start dancing - we’re Dreaming.” - Nathan Baira.

All images: by Shaun Daniel Allen.