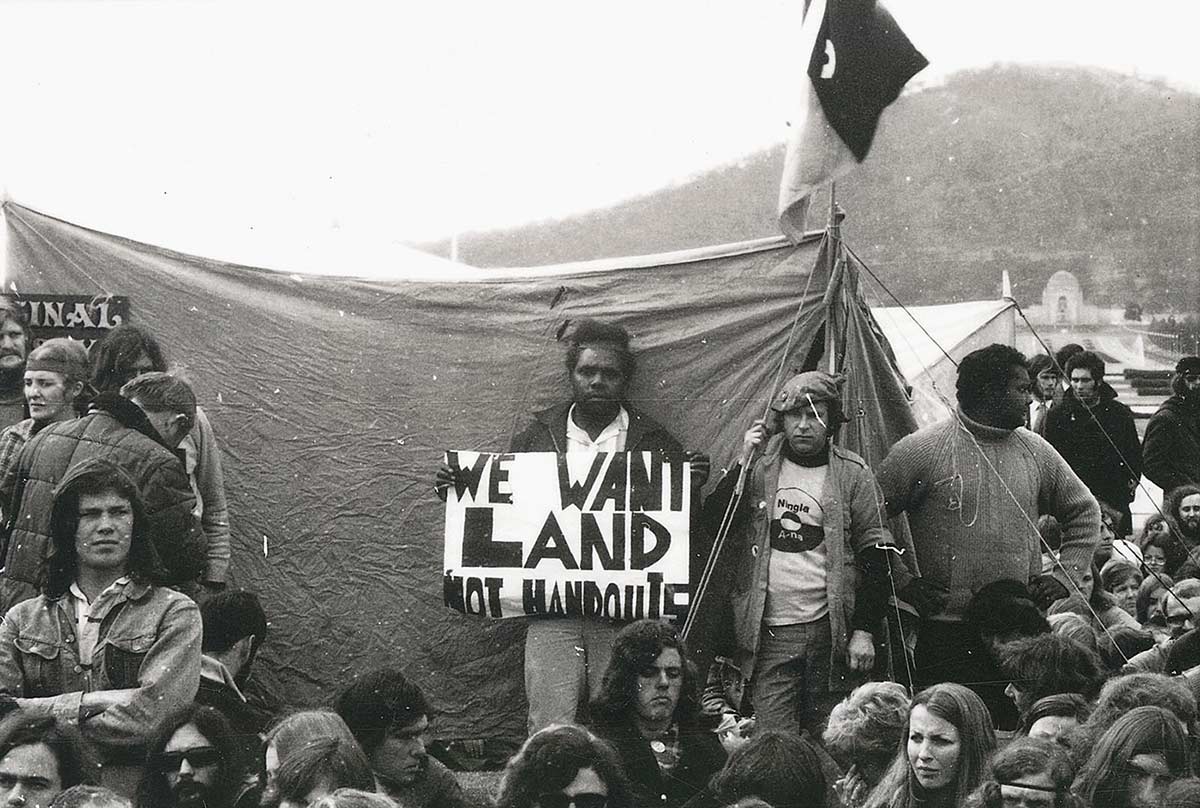 This article is part of a series on land back.

First Nations readers are advised this article contains names and images of people who have passed.

Land back means a reckoning with so-called Australia’s history and the unjust ways land was stolen. And the movement isn’t just about land. It’s also about protecting sacred sites and cultural heritage; revitalising and strengthening First Languages; going back to old ways of land care, fire management and farming; and ensuring community has access to land, water and resources. It’s about changing systems to acknowledge First Nations rights and responsibilities to Country. Only then can we achieve climate justice and begin to restore this continent’s once abundant, diverse and unique ecosystems.

THE ORIGINS OF LAND BACK

Land back is a simple phrase, but not many people are confident they know what it means. It is believed that the phrase was popularised by Indigenous artists in Turtle Island. In an article for the Canadian Encyclopedia, Amanda Robinson says Turtle Island is a name used by some Indigenous people to refer to the continent of North America.

“The name comes from various Indigenous oral histories that tell stories of a turtle that holds the world on its back. For some Indigenous peoples, the turtle is therefore considered an icon of life, and the story of Turtle Island consequently speaks to various spiritual and cultural beliefs,” says Amanda.

Over time social media, online activism and memes have brought the phrase to our shores. It became especially prominent during discussions about the 2021 NAIDOC Week theme - Heal Country. First Nations musicians, artists, writers and activists from across the continent harnessed the momentum of NAIDOC Week to amplify a message: we can’t heal Country if our inherent rights to Country aren’t recognised. We can’t heal Country without land back.

While the phrase may seem new to some, the movement is much older. For First Nations people in Australia, it started when the British invaded in 1788.

First Nations sovereignty (our rights and responsibilities to Country) has never been ceded (handed over to the government). First Nations people have been resisting land theft and colonisation ever since the British wrongfully applied terra nullius (land belonging to no one) to the Australian continent.

Since the arrival of the First Fleet in 1788, First Nations people have defended Country in various innovative ways. Many people refer to the period from 1788 to the 1930s as the Frontier Wars, characterised by conflicts and battles led by First Nations people against the colony.

Boe Spearim is a Gamilaraay and Kooma man, member of Gamilaraay Next Generation, and host of the podcast Frontier War Stories. Boe says First Nations people were “involved in conflicts and battles to defend their Country, and Europeans carried out massacres to expand the British colony.”

Many First Nations warriors fought on the frontlines during the Frontier Wars, and we continue this legacy in other ways today.

Terra nullius was deliberately applied to the Australian continent to allow for the expansion of the colony without any agreement with or compensation to the rightful owners - First Nations people.

In 1992 the High Court ruled terra nullius as legal fiction in the well-known Mabo decision. The decision affirmed what First Nations people have known since forever - this continent always was, always will be First Nations land.

One year after the Mabo decision, the Native Title Act 1993 (Cth) was passed. But as Gumbaynggirr activist Gary Foley titled his 1997 essay, native title is not land rights.

“When the full bench of the High Court in the Mabo case found that terra nullius was no longer a valid notion, the judges decided that ‘native title’ existed in 1788, and therefore must ‘survive’ today in those parts of Australia where freehold title did not exist. This finding meant that in all the main populated areas of Australia where freehold title of land predominates, the Aboriginal people had been dispossessed, without compensation, and had little or no chance of succeeding in any native title claims. This aspect of the Mabo decision represents the greatest single act of dispossession in Australian history since 1788.” - Gary Foley.

The modern land rights movement gained momentum in the early 1960s. It started in the Northern Territory with the Yirrkala bark petitions. In 1963, Yolŋu people from the Yirrkala community in north-east Arnhem Land presented the Australian Parliament with two petitions. One written in Yolŋu Matha and the other in English.

The petitions were a response to a unilateral decision by the Menzies Government to open a bauxite mine at Yirrkala. Bauxite is the main raw material used in the commercial production of aluminium.

The petitions were pasted onto bark that had been traditionally painted. They demanded the inherent land rights of Traditional Owners be respected. In her essay for The Conversation, historian Clare Wright says the petitions were a protest against decisions made about Yirrkala without consulting the community. “Nowhere do the petitions suggest that [Yolŋu] are opposed to mining per se. What they requested was a voice,” she says.

The mine went ahead and the extraction of bauxite at Yirrkala continues today. But, as Clare writes in her essay, the petitions led to the establishment of the Select Committee on Grievances of Yirrkala Aborigines*. “[This is] the first time in Australia's history that a petition had directly led to a parliamentary enquiry,” she says. *Please note that the use of this term is now considered outdated and offensive.

Gurindji man and elected leader of the strike, Vincent Lingiari, knew the land they worked on belonged to Gurindji people and demanded it be returned. “You can keep your gold. We just want our land back,” he famously said.

The Intergovernmental Panel on Climate Change recognises that climate justice is inherently linked to acknowledging the rights of Indigenous peoples. On a global scale, Indigenous people make up less than 5% of the world’s population, but protect 80% of the planet’s biodiversity.

In Australia, First Nations people have accumulated a wealth of knowledge about coexisting with Country over a period of at least 80,000 years. From fire management to traditional farming, caring for Country is deeply embedded in our cultures. It’s clear then, that land back can be a solution to the climate and biodiversity crises we face today.

Land back today is about changing systems that harm Country. Current systems of land governance not only exclude First Nations people from decision-making, but they also favour industry and development. This leads to overallocation of valuable resources like water, and the destruction of cultural heritage and sacred sites.

First Nations land governance is centered on responsibility (obligations), relationality (the relationships between everything) and reciprocity (keeping balance). We see land as not something to be owned, but something that owns us. So land back isn’t necessarily about land ownership. Land back is about culture back, language back, ceremony back, water back. This isn’t to assume that ties have always been lost, severed or degraded. Every community has a unique experience, and land back is about strengthening, reclaiming and regenerating. It’s about returning First Nations people to land so we can protect Country for future generations.